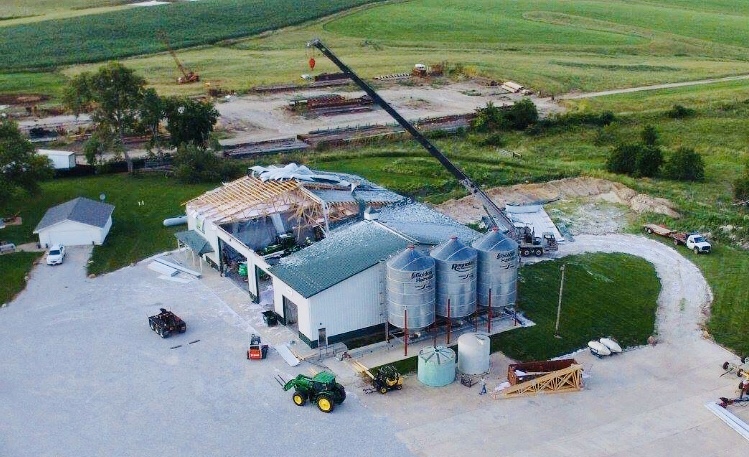 The 32-year-old Indianola, Iowa, farmer and agribusiness owner was starting to outgrow his then 6-year-old shop. Mother Nature dictated he replace it sooner rather than later.

Reynolds and Jeff Thompson, a technician and sales associate with Reynolds Ag Solutions, were inside the shop when the violent storm hit. Thankfully, no one was hurt.

“We lost power, heard a big bang and the roof was gone that quick,” Reynolds remembers. “We got out, and the trusses fell down on top of everything, sucking in the sidewalls. I was in shock.”

Only the concrete floor was salvageable of what Reynolds calls a nice but flawed building.

Reynolds will never call the storm a blessing, but the young farmer was handed an unexpected shop do-over.

Horizon Buildings, of Drakesville, Iowa, built an 81-x-168 shop in its place. A 1,200-square-foot showroom was added for Precision Planting displays and customer interaction. Offices and Reynolds’ living quarters are attached.

“Now, I can talk to customers without the noise of grinders and air tools in the background,” Reynolds says.

Building posts were reinforced, and roof trusses were extended 2 feet beyond the walls and secured with hurricane clips to prevent future wind damage.

With a price tag of nearly $1 million, Reynolds corrected past mistakes and added new amenities to efficiently farm and take care of seed and ag equipment, and repair customers’ equipment for decades to come.

“It is my dream shop,” Reynolds says.

The new shop is 5,100 square feet larger than the old one and a foot taller (20-foot ceilings). The overhead doors are a foot taller, too — one 30 x 17 and two 16 x 17, which are across from each other for drive-through convenience. A 12-x-12 door was added for forklift and pickup access.

“Equipment isn’t going to get any smaller,” Reynolds says. “Now, I have room for a combine, semi, a 24-row planter unfolded and a 12-row planter folded. In the winter, that’s a big advantage to get work done.”

Loft storage space on the building’s north end was expanded from 1,600 square feet to 4,800 square feet with pallet shelving. The floor was reinforced to hold 650,000 pounds. This allows the business to keep extra Precision Planting and farm parts on hand.

“I don’t want a customer (or me) being down in the field in the spring,” Reynolds adds.

> The shop has in-floor heat via a propane boiler. There’s forced-air heat and air-conditioning in the showroom, living quarters and offices.

> Closed-cell spray foam and 25 inches of blown insulation give the shop an R50 rating, doubling the previous shop’s rating.

> All lights are LED and on motion detectors.

“Despite the increase in shop size, the electric bill remains about the same,” Reynolds says. “Propane use has decreased.”

> Air circulation was improved for worker comfort with six shop ceiling fans, which are on individual switches and reversible.

> A break room was added in the loft to provide a comfortable space for lunch and planning meetings. Previously, both were done at a workbench.

> Bulk storage tanks were installed for engine oil, engine coolant and hydraulic fluid. Each has a 50-foot hose reel with electronic metering dispensers.

> Air lines were placed on the inside of exterior walls instead of on the outside to prevent freezing, unlike the other shop. Plus, enough hose reels were scattered throughout the building for 100% coverage.

Earthwork is done to eventually build a 72-x-120 cold storage shed for equipment behind the shop for himself and customers.